Should a charterer do business with a shipowner in financial trouble?

There are a number of shipowners / shipoperators around with less than healthy financial positions. Some of them are quite well known, the banks and creditors are onto them and they are treading a fine line hoping to stay afloat until market conditions change.

So the question is "should a charterer fix with a shipowner who is in some financial trouble".

First thing is this. The charterer is the one who pays the shipowner, so this is a prefered position to be in. You are the the one who owes the shipowner not the other way around. So yes i think from a starting point fixing your cargo to a fincially insecure shipowner is ok. What you don't want to be doing is fixing your ship to this same owner (to cover one of their cargoes) because they then need to pay you.......and this will be problematic. Especially if they are in survival mode.

So there is an opportunity for a win / win in this case. Cheaper rates for voyage charterer, cahsflow for owner on the skids.

The biggest problem you can have is if the ship carrying your cargo gets arrested. Then your cargo could be stuck onboard causing immense pain for months to come.
Never fix a long term contract with a shipowner unless they are financially sound.


Dont comma rockin if the repo man comes a knockin...(that makes no sense but run with it...)

VS
Posted by The Virtual Shipbroker at 4:56 PM 4 comments:

I have recently been quite interested in the idea of Personality Types and how your ingrained preferences can dictate just about every outcome in your life.

The most famous personality test is called the Myers Briggs test and it groups you into one of 14 distinct personality types and using this information it can predict / give advice about everything from most suitable jobs, suited partners and what hobbies you will probably enjoy

For me it has been a scary revelation. I am what is known as an INTJ personality type which is the rarest in the land making up only 1 pct of the general population. Whats interesting about INTJ's though is our over representation on the internet when it comes to financial blogs and blogs about early retirement. The INTJ is known as the "mastermind" and we like to find efficiencies and systems and then exploit them (in a good way) to our benefit. Certainly important for shipbrokers and charterers i would have thought. 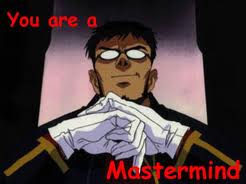 Anyway - INTJ's make up approximately 38 percent of all financial bloggers accross ideas such as finance, realestate and retiring early. A massive over representation which is is interesting to me anyway.

But no word on whether INTJ makes a perfect Shipbroker - if there is such a thing, I actually think E type personalities are more likely to make better day to day shipbrokers as they are more social. But like most things there is room for everyone. As is said being efficient and finding holes in certain markets has certainly worked well for me.

Here is a simple 5 minute test..

Drop me a line and let me know what you are?

Cheers
INTJ VS
Posted by The Virtual Shipbroker at 5:54 PM 10 comments:

The current crop of students in the VS dry cargo chartering and shipbroking certificate are coming towards the end of their 4 month course and from all accounts the course has once again lived upto expectations (and more).

A current student - "This course I will really miss and has given me huge confidence in my day to day activities".

Now just on that matter. My intention was not to run another course until early 2012 BUT I have had a handful of requests asking if there is any chance to start earlier - namely from the first of December.

For me I have some flexibility and it all depends on numbers. I need more than 2 students to make it worth while

So to those that missed out on the last intake here is your chance to fast track your skills sooner rather than later.

If any of the readers are interested in enrolling in my Shipbroking Certificate starting December 1st (final confirmation will depend on numbers) then please let me know within the next 3 days!

If no takers then we push it back to next year!

For further information on the course including format and cost just surf the blog and all will be revealed.