For the spiritually diverse with a sense of humor!

The following is an actual question given on a Physics Exam in the USA. The
answer by one student was so "profound" the professor decided to share
it with colleagues, via the Internet,

I thought it was funny and tried to spin it into a shipping yarn but no matter what i came up with it didn't work. I do know that the shipping people I know think about Hell a lot...usually after 2 am...

So here is the original version.

Most of the students wrote proofs of their beliefs
using Boyle's Law (gas cools when it expands and heats
when it is compressed) or some variant.

One student, however, wrote the following:

With birth and death rates as they are, we can expect
the number of souls in Hell to increase exponentially.
Now, we look at the rate of change of the volume in
Hell because Boyle's Law states that in order for the
temperature and pressure in Hell to stay the same, the
volume of Hell has to expand proportionately as souls
are added.

So which is it?

If we accept the postulate given to me by Teresa
during my Freshman year that, "it will be a cold day
in Hell before I sleep with you, and take into account
the fact that I slept with her last night, then number
two must be true, and thus I am sure that Hell is
exothermic and has already frozen over.
The corollary of this theory is that since Hell has
frozen over, it follows that it is not accepting any
more souls and is therefore, extinct...leaving only
Heaven thereby proving the existence of a divine being
which explains why, last night, Teresa kept shouting
"Oh my God."

THIS STUDENT RECEIVED THE ONLY "A"

Nice work!
Posted by The Virtual Shipbroker at 9:21 PM No comments:

The social side of shipping

From a friend in China

I was just wondering if "entertaining" is commonplace in the broking industry over in the west. I was pressured to go out by my seniors yesterday, for drinks at a karaoke bar. A charterer was there too. Had to sing, and they kept handing out beers. Don't get me wrong, I like beer, just not drinking it excessively for the sake of getting drunk.

Yep this is pretty common place. As it is in most high flying professions like banking, trading and even the law. Some of the most debaucherous (spelling?) behaviour I've seen has been carried out by multimillionaires from all different races, nationalities and even sexes.

You should read what those crazy french royal family used to get up to before the revolution in the late 1700's. 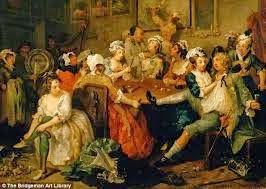 The good news is that although some compromise is needed, if you are uncomfortable with the overt social culture of chartering, you can be a clean skin. After a few years of social ostracism and some ribbing, if you stay true to your self you will be respected either way.

But yes if you thought shipping was full of well dressed respectable people then you are only half right...lol..

I did tell on this blog that a few years back I met Jordan Belfort the real wolf of Walls st (after he spent time in jail) socially while on holidays. After a 30 minute chat he actually suggested that we go out for dinner (with the wives) and I quickly and politely declined letting him know that he and I move in different circles. I told him that a big night out for me these days is a glass of wine, an occasional cigarette and in bed by 10pm

How many people would knock back an invitation to party with the wolf of wall st???

VS
Posted by The Virtual Shipbroker at 8:23 PM 3 comments:


I have changed one or two points to protect anonymity - but its a great story.

I hope she doesn't mind (doh)

Hope you are well.

In short I'm a 26 year old second generation British female going on 27 with nothing to show apart from a divorce and extortionate university fees to repay. I have a BA and MSc under my belt from a redbrick University in Business and currently working in shipping for a fashion supplier going stale. When I was younger no way in hell did I envisage myself in this pothole but nothing in life goes to plan lol. I had great visions of happiness and success like all but growing up and life experiences give you wisdom. Happiness is acceptance and I accept I need to make drastic changes now in order to attain the latter. Success I can attain and happiness is the constant. Funnily my unhappiness is so obvious, that when a new manager joined my team suggested that I look into ship brokering. She has worked for shipping lines, freight forwarders and has experience in vessel chartering and she believes I would be cut out for it. In her words I take no shit from no one within reason of course and I always want to know why. I'm hungry for new challenges and have a burning desire to break free from the mundane 9-5 and make something of myself. So I have started researching and I'm falling in love with the idea of ship brokering.

This is preliminary research and I strongly believe second to actually doing the job the best way to understand something is to talk to a person who has lived it. I would much appreciate it if you could answer the below questions and address the concerns I have:

How would you describe the job bluntly (good and bad)?

I know I'm intelligent, hard working, a fast learner, thick skinned and outspoken coupled with my background is this enough?

In an industry which is male dominated, does the glass extend from the ceiling to the door?

What steps do I need to take to become a ship broker?

Can you recommend other sources of research, reading, people to talk to etc....

I eagerly look forward to hearing from you

I would hire this woman but Bhutan isn't really the centre of shipping these days...so if anyone is 'on the hire' drop me a line and I will put you in touch...

PS - I don't usually do this (offer to pass on job offers) but this email made me laugh and convinced me that this person would be a formidable person to deal with in the shipbroking world. If many readers could channel this 'vibe' and level of honesty it would imo open up many doors. Well done.

Posted by The Virtual Shipbroker at 4:33 PM 2 comments: