An interesting article i just read...

Grab a stiff drink and follow if you will

b) Ship gets attacked by pirates causing much despair, delays and costs including a multimiliion dollar ransom

(my language but here is the crux)

(where did the 150 million smakeroonies go?)

The ship was actually valued at USD 34 million but due to the fact the Somali Pirates are not very good house keepers (who would have thought?) damages to the vessel are estimated at 5 mill (thank you very much!)

And guess what...........the poor managers who contributed to this terrible line of consequences will probably go into hiatus for 2 years and start a new company from scratch and play poker once again...

No wonder people are nervous.........banks included!

You seem to be a very knowledgeable person - so please can you tell me what the expression "cargo is King" means - does it mean that if you are a shipowner you are a pauper ?

It would seem to be very strange if a shipowner was regarded as someone who was not wealthy person.

i think if market is lacking tonnage then the owner has the upper hand so ship would be king - but i never heard THAT expression before….

if the market has lots of ships the cargo owner or charterer is generally in a stronger position - so both situations are valid but in that case why such expression for only one of them ? 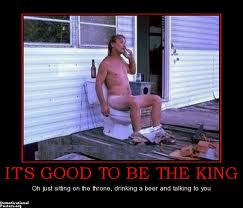 Thanks question. "Cargo is King" is an old BULK shipping expression and has nothing to do with the wealth or otherwise of shipowners. Infact Shipowners are some of the wealthiest people in the world with a high number being billionaires especially in places like Scandanavia, Greece, London, Hong Kong etc

"cargo is King" is a trading term and it basically means that much of the power is in the hands of the charterer because at the end of the day the 'charterer" or cargo client IS THE CUSTOMER!...

Without cargo a shipowner wont have full ships and without full ships they cannot make money. So its always in a shipowners best interests to keep his clients happy.

Now the waters do get a muddy here especially in high shipping markets when infact it appears that charterers need shipowners more than shipowners need them. Prices for ships go through the roof and it is now the charterers to turn to try and be nice to shipowners so they get a good freight rate rate. It was like this for "naughties" (2000 thru 2011) during the great shipping bubble!

From a shipbrokers perspective I have always found that there is much more power being in bed with a charterer then with a shipowner. Shipowners although they pay the commissions the charterers are usually the ones who can dictate channels and decide which shipbrokers they want to work with. They can do this because they can select who to show their cargo... So in shipbroking very often cargo is KING.

But like most things there needs to be a balance and exceptions to general premises. In shipping we all need eachother and the experienced instictively understand this. Indeed many shipowners due to size and covereage are super powerful and many smart brokers know how to look after their interests. Infact many brokers only broker tonnage.

Shipping is full of Little Kings from all walks of life (and im not sure thats a good thing!)

We welcome in 2012 with an unfolding shipping tragedy in Italy...

Man....... could this Italiano Capitan be is some serious trouble. Italian Law imposes a maximum of 14 years for Captains who abandon their ships and he must also face manslaughter charges relating to the mounting death toll...

Its very surreal seeing this grand looking primo cruise ship half submerged to the backdrop of the calm waters of the magnificent Italian Coast.

Much like the Exon Valdez, this disaster, also due to human (captain) error, has grabbed the headlines. But spare a thought for the few dozen bulk carriers that also split, crash, sink and kill every year.

Being a seaman can be very rewarding but we can also see very dangerous occupation. Shipbroking on the other hand is less dangerous with the occassional nail breaking on the keyboard when typing a cargo order or a ships offer. I once tripped on a golf ball walking to the photocopy machine....but i managed to get through!


I jest a little - our thoughts are with anyone who have lost people at sea...and respect to those on the ships who are risking life and limb!

Yours
VS
Posted by The Virtual Shipbroker at 5:59 PM 2 comments: